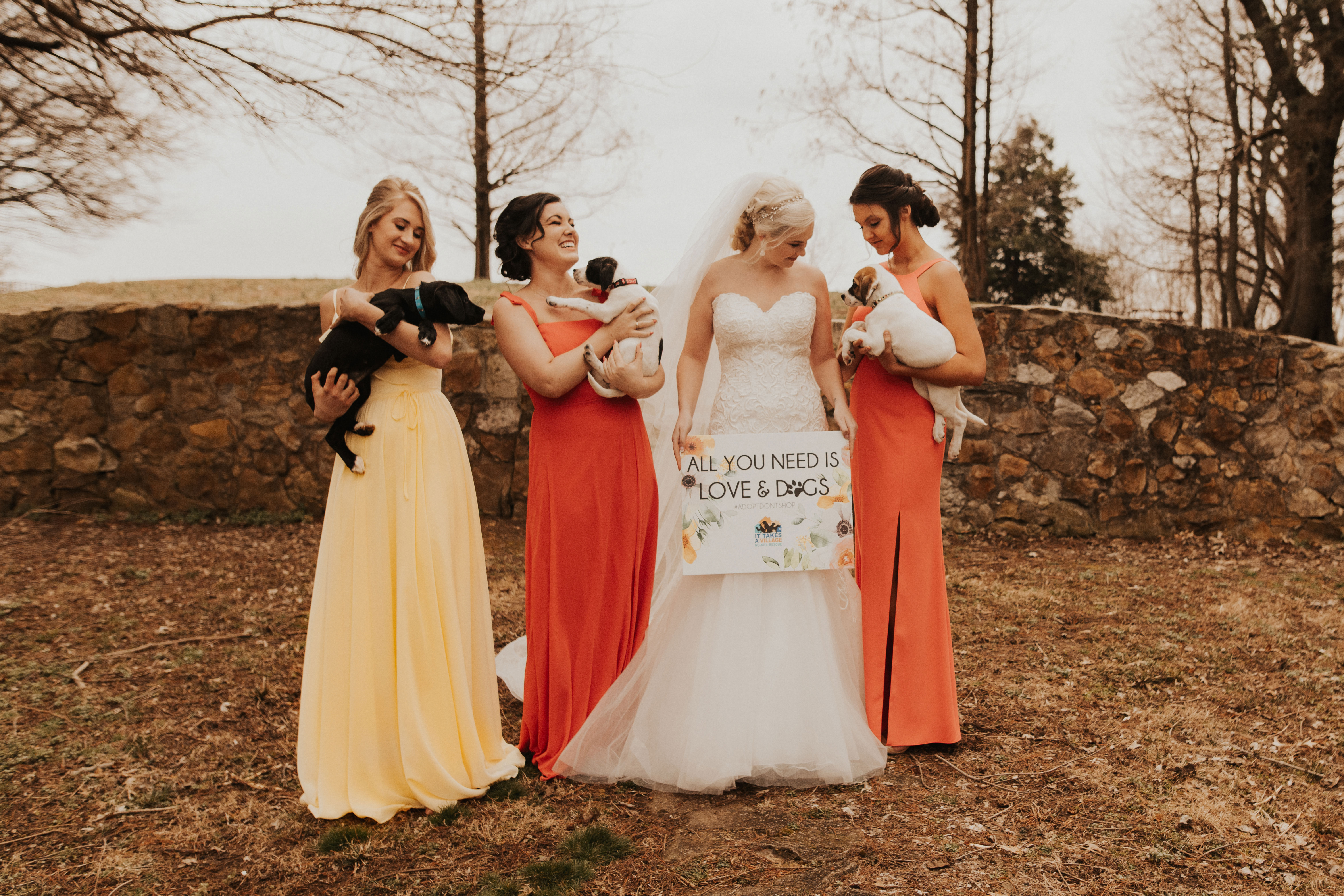 For this issue, we collaborated with our friends from It Takes a Village. We loved the idea of incorporating something extra special into your big day that involves one of our area non-profits. For this shoot, we showcased our love of rescue pups. It’s not unheard of to choose a bouquet alternative, and working with one of our area rescues to incorporate adoptable pups increases their organizational awareness as well as might actually help them adopt a pup (or a few) the day of your actual wedding. Either way, we were honored to pair with It Takes a Village for this issue’s photoshoot as they play a vital role in our area rescue community!

In 2010, a group of volunteers saw a dire need to help unwanted animals in Evansville and beyond. The group, led by Brie Stafford, started working out of Evansville Animal Control to help prevent homeless animals from being euthanized. In the summer of 2010, Brie met Susan Gainey Odoyo, JD. They both shared a passion for helping reducing the euthanasia rate at kill shelters in the area. Brie and Susan became quick friends and dreamed of forming a no-kill rescue in Evansville. One day, they were having lunch at the McDonald’s on the Westside of Evansville and, while Brie’s young son played, the idea of It Takes A Village was born! The name came from an African proverb that It Takes A Village to Raise A Child and Brie and Susan believed that It Takes A Village to Save an Animal! One of Brie’s favorite sayings was, “Saving one dog will not change the world, but surely for that one dog, the world will change forever.” With this mantra in mind, Brie and Susan began working with other volunteers in the creation of It Takes A Village (ITV), and on November 15, 2010, ITV was formally formed.

In the beginning, ITV was a foster-based rescue without a facility. However, at the end of 2011, Susan wrote a $25,000 grant as part of the Pepsi Refresh Project. The submission was selected to compete in a voting contest and ITV supporters rallied to get votes. With a midnight deadline on New Year’s Eve 2011, Susan gathered friends and went out into the community asking everyone they encountered to take out their phones and vote. So, it was truly a community effort and with the help of our Evansville “village,” ITV won the $25,000 prize! The 2011 new year meant Brie and Susan spent the next several months searching for an appropriate building for the ITV Rescue Center. During the search, they met Andrea Will, then co-owner of Stockwell Inn. Andrea had an old storage building next to Stockwell Inn (1417 N. Stockwell Road) that could be converted to a rescue center. It took vision to see what it could be, but with a lot of sweat equity from community members, the old storage building was converted into what it now the ITV Rescue Center. On July 20, 2012 the ITV Rescue Center opened. Operations relied on community volunteers at that time. As the ITV Rescue Center grew, paid staff was hired to accommodate for the growth and take care of the animals at the ITV Rescue Center. Tangila Ashby, who was a volunteer and foster, began working as the Executive Director of the ITV Rescue Center. To this day, ITV remains heavily dependent, however, on community volunteers.

Today, ITV averages over 120 animals relying on ITV to provide them with food, housing, veterinary care and, ultimately, find them a home. ITV’s rescue center houses 40-50 dogs. Further, they average an additional 70 animals in private foster homes. ITV is the first, and currently only, no-kill rescue center in Evansville. Their live release rate is 99.98%. ITV rescues animals from government shelters, guardian surrenders and strays. They are primarily a dog rescue, but they sometimes help cats if they have foster homes available since the ITV Rescue Center does not have space for a cattery. They also periodically help other animals such as pigs, geese and small animals. Although they do not discriminate based on breed, size or color, they have a particular interest in helping bully breeds, black dogs, animals with medical needs and other “hard-to-place” animals. Their mission is to “work as one in helping homeless animals irrespective of breed, location or circumstance.” They are a 501(c)(3) rescue.

Since they formed, they have rescued over 4000 homeless animals, and their efforts have been recognized with a Reader’s Choice Award for the “Best Place to Adopt A Pet” for six years in a row! They are proud that they did this on a “shoestring” budget, continuing to rely heavily on volunteers to help us. They do not receive government funding and most of our donation come from individual community members.

To learn more about It Take a Village or to check out their adoptable pets, visit their website at: https://itvrescue.org/