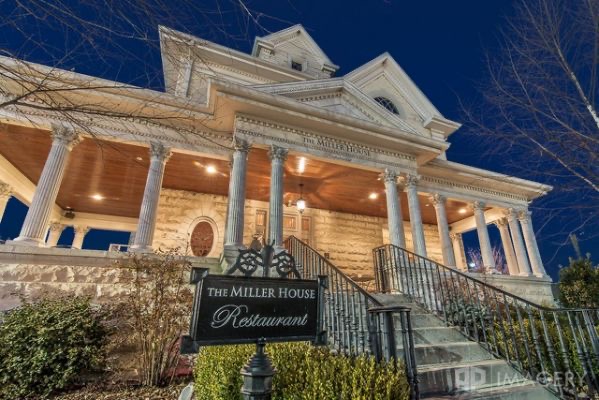 In Owensboro’s historical downtown district, The Miller House is a casual, family-owned restaurant, serving traditional food with a Southern influence. Enjoy brunch, lunch and dinner in their historic home built in 1905. They take reservations yet walk-ins are welcomed. In a hurry? They have take out and delivery. The Miller House Restaurant offers seasonal menus to ensure the highest quality produce and proudly serves Kentucky Proud products. They also grow their own vegetables in their personal garden for the freshest meal in Owensboro.

“It will be a Model of Beauty, Elegance and Convenience Throughout”

This quote, as written in the Messenger Inquirer in the summer of 1905, described the plans for the elaborate home of Elmer and Lizzy Miller located at Fifth and Lewis (now JR Miller Bouleveard). In 1905, Elmer Miller obtained a mold by Sears, Roebuck, and Company to make 1,800 artificial stone blocks for his home. He hauled sand for the blocks up the Ohio River during construction. Referred to as the prettiest and most conveniently arranged in the city, this $8,000 home displayed beveled glass windows, magnificent woods, mantels with tile hearths, and combination of electric and gas light fixtures. Beside the home, stood a carriage house erected for Elmer’s electric automobile (said to be the first in town).

Elmer was a prominent business man during his time. He founded the Miller Coal and Contracting Company in the late 1880’s and expanded to transfer and hauling as well as road building. Elmer Miller laid several miles of roads in Daviess County. He served on the City Council and was a member of the Rotary Club and the Chamber of Commerce. Lizzy Miller was a member of the Women’s Club and a leader in Red Cross activities during WWI. Both Elmer and Lizzy Miller were very charitable. As active members of First Christian Church, the couple donated left over stones to the church during construction in 1905. Elmer sent many loads of coal to those in distress and otherwise helped those in need. In additional to their many contributions to Owensboro, Elmer and Lizzy Miller built a home which would later be called “A jewel of Old Owensboro”.

Elmer Miller passed away in 1922 at the age of fifty-six. Lizzy Miller lived in their home for twenty more years. Neighbors describe her as a generous woman who also made chicken soup and molasses pie for those who were sick in the neighborhood. In the late 1960’s and 1970’s the home was turned into several apartments and housed various owners and tenants. The Kentucky Heritage Commission designated the Elmer Miller House as a Kentucky Landmark under Governor John Y. Brown. Despite on- going efforts, the house continued to deteriorate. The carriage house was condemned and the future appeared bleak. However, the home was on the brink of a rebirth.

Larry and Jeanne Kirk purchased the home in 2006 and began plans for restoring the home, as part of the up and coming downtown area. With construction about to get underway in the Historical District, a tornado struck Owensboro in October of 2007 causing extensive damage to the home. The back portion of the house was demolished, several windows blew out, and the large tree near the front porch uprooted and landed on the second story roof. Again, the future of this historical home was in question. Fortunately, the damage was surmountable and construction resumed following repairs. Restoration continued throughout the next two years. Over a century after Elmer Miller built his extraordinary home, a new era began. In an effort to restore the “Model of Beauty, Elegance and Convenience Throughout” the Miller House Restaurant opened for business.